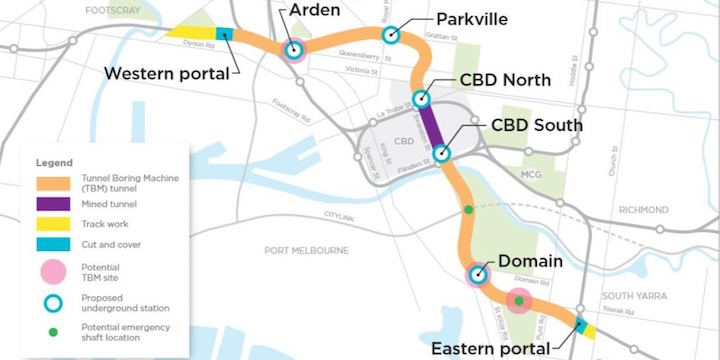 In a win that has been reported to be worth around $6 billion, Lend Lease Engineering will lead a consortium to build the Metro Tunnel and five new underground stations.

The announcement was made today by Premier Daniel Andrews and Minister for Public Transport Jacinta Allan. The other members of the consortium are John Holland, Bouygues Construction and Capella Capital.

The tender process was a competitive one and included the world's top construction and tunelling contractors. Around 500 jobs will be created and the new stations will include wider platforms, natural light and arches as well as revitalised space above ground at the stations to reduce crowding.

"We’ve chosen the design, we’ve chosen the builders and we’re getting on with it. We’re building the train network Victoria needs and creating thousands of local jobs," he said.

Early works are underway and current tenders can be found by searching Australian Tenders.

More information about the project can be seen at the Metro Tunnel website.

Details about the works:

In the CBD there will be two entrances at City Square, and at Swanston Street, Flinders Street, Federation Square, Franklin Street and La Trobe Street.

In Parkville, a new entrance will be built on the doorstep of the Royal Melbourne Hospital, giving thousands of people from Melbourne and regional Victoria better access to the Hospital.

Walkways at Flinders Street and Melbourne Central stations will be put underground, allowing passengers to change easily between the Metro Tunnel stations and the City Loop, creating a true, international-style metro network.

Domain station will feature a floating timber canopy and sit below the new tram interchange on St Kilda Road, relieving the pressure on the world’s busiest tram corridor.

Early works are well underway, with major construction on the tunnel and stations expected to start next year.