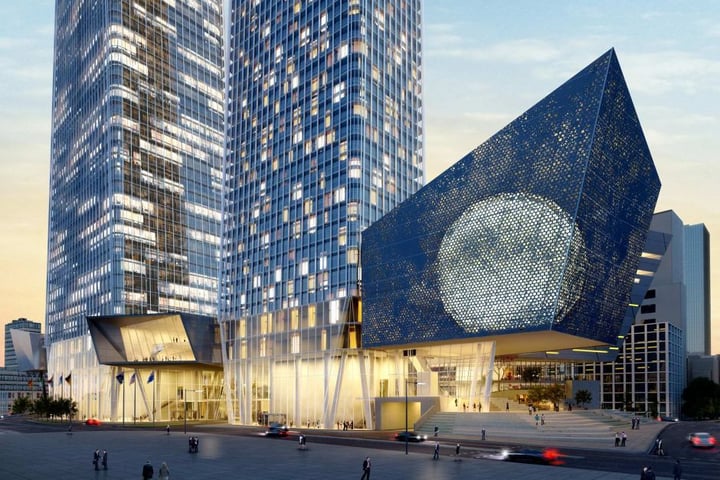 Plans for the World Trade Center in Perth emerged last year (2016), after it was revealed Ghazi Abu Nahl, a chairman of the World Trade Centers Association, met in 2014 with the Metropolitan Redevelopment Authority (MRA) to express an interest in the East Perth Power Station site. This private sector redevelopment proposal is the first to be initiated under the Liberal National Government's unsolicited bids policy, which was adopted in January 2016.

Perth World Trade Centre will involve an iconic architectural design to showcase WA capabilities and commercial opportunities and connecting our city to 330 other World Trade Centre locations around the world. The 75-storey proposal includes restaurants, a shopping centre and an international trade, investment and convention centre. It would stretch from Stirling Street to Wellington Street, above and across the existing railway line running east from the Perth train station.

The status of the bid, which passed through an 11-month first phase under the Barnett government, has been muddied by the election of a new State Government, led by Premier Mark McGowan, which has made substantial rail infrastructure commitments under its Metronet program.

The Perth World Trade Centre will contend for funding from Mr Abu Nahl’s Nest Investment Holdings (which won 3 World Trade Centre licences in China last year) and is expected to generate $100 million a year in trade revenue in Perth.

Nest operates 16 World Trade Center licences throughout North Africa and the Middle East, the Chinese licences taking that to 19. World Trade Centers are considered extremely invaluable as both a result of the capacity for jobs generated during construction as well as commercial and trade links around the world. Perth is thought to have been selected over other Australian cities because of its trade-friendly time zone and Mr Abu Nahl’s affection for the city. Given the plan is still in the early stages, it is thought the World Trade Center proponents could accommodate the State Government’s need for a wider rail corridor.

Perth’s Lord Mayor Lisa Scaffidi has also endorsed the project on behalf of the City Council. According to Mayor Scaffidi, the project will help the economy as it will generate job opportunities and over $100 million annually in significant trade revenue.

Perth property specialist and World Trade Centre Perth Business Development Director, Neil Kidd will manage the Perth centre’s commercial activities and says the location for a WTC in the WA capital is ideal given its geographical location. According to Mr Kidd, given Perth’s proximity to China, India and Japan and Perth’s friendly time zones, the city is strategically located to take full advantage of this opportunity. There are 330 licenced WTCs in over 90 countries, which operate under the WTC brand, including one in Melbourne.